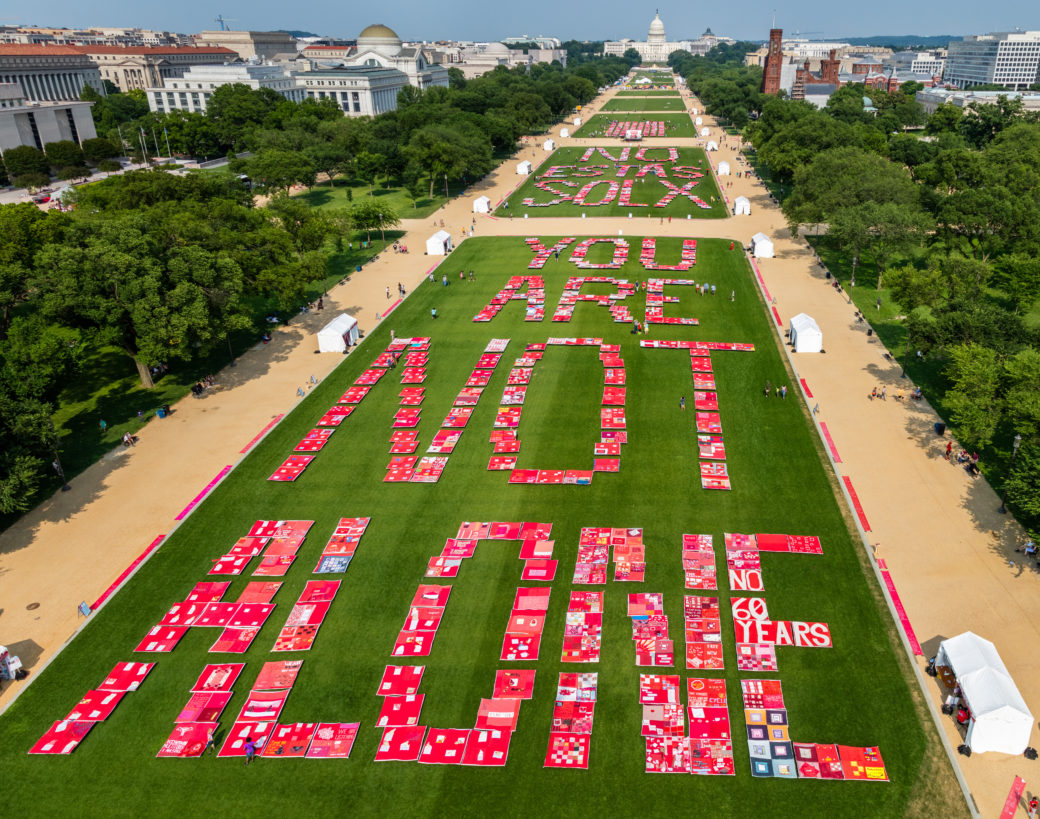 The Monument Quilt, a project of Baltimore-based survivor collective FORCE: Upsetting Rape Culture, is a collection of over 3,000 stories created by survivors of sexual and intimate partner violence and our allies, written, painted, and stitched onto red fabric. In the project’s 6 active years, our stories literally blanketed highly public, outdoor places to create and demand space to heal, and resist a singular narrative about sexual violence. A photograph of each quilt is archived at app.themonumentquilt.org.

The Monument Quilt is the first memorial to survivors of sexual and intimate partner violence. It began in 2013, and over 6 years, the Quilt was displayed 50 times in 33 cities across the US and in Mexico, including at the US-Mexico border. FORCE partnered with over 100 organizations around the world over the course of the project. Members of the staff collective shaped the vision of the Quilt, guided by our Leadership Team. At the time of the culminating display, the staff collective included Charnell Covert, E Cadoux, Mora Fernández, Hannah Brancato, and Shanti Flagg. Former staff collective members include Saida Agostini, Robin Marquis and Rebecca Nagle. FORCE was co-founded by Hannah Brancato and Rebecca Nagle in 2010. After 6 years of organizing, in the 50th and final display in 2019, the Monument Quilt stretched across the National Mall to spell out You Are Not Alone and No Estás Solx in a 3-day, 24-hour healing festival. Over 50,000 people saw the Monument Quilt in person, and hundreds of thousands engaged online. This was the only time that the quilt was displayed in its entirety. Images from the final display are available here.

The culminating display was covered by Ms Magazine, Voice of America, the Marshall Project, the Washington Post, WUSA, Huffington Post, and more. The project previously received national coverage through MSNBC and Refinery 29, including of our art actions at Standing Rock and in solidarity with Marissa Alexander. We continue to receive local coverage during Monument Quilt workshops and events organized by our partners, such as this article in the Alton Telegraph. Video from our 2014 tour can be seen here, and footage from our hometown, Baltimore, is here.

The Monument Quilt had an international impact. In 2014, FORCE made a partnership with La Casa Mandarina AC (LCM), an itinerant and independent non-profit organization, based in Mexico City, devoted to ending sexual violence through ARTivism. The Monument Quilt became international thanks to LCM who partnered with local organizations in Mexico and around the world. LCM organized 3 displays in Mexico City and co-organized the Mexico-US border display in Ciudad Juárez and El Paso. LCM facilitated more than 20 lectures and 50 workshops in 8 countries and collected quilts from Mexico, Palestine, Bangladesh, India, Honduras, Japan, South Africa, Czech Republic, Indonesia, Thailand, Germany, Argentina, Paraguay, Serbia, Pakistan, Afghanistan, Australia, Philippines, Canada + Zimbabwe. In 2016, the Mexico City Human Rights Commission awarded LCM for their work on prevention of sexual violence through the Monument Quilt.

Following the 50 and final display, FORCE is now archiving the Monument Quilt, placing each of the 750 blocks in permanent collections around the world, so that these urgent stories from survivors and our allies can continue to be heard and so that the history and legacy of our efforts can be preserved. FORCE seeks to find a home for every single piece of the Monument Quilt, spreading its expressive power. The thousands of survivors who told their stories in the more than 3000 quilts, did so between 2013-2019 — during the MeToo era — illustrating the role of art in creating this dramatic shift in consciousness.

Partner organizations who organized these displays include: